Update: I have open sourced this game on Github

You can play the game here, or install it from Chrome Web Store.

Gomoku is one of the very few board games I actually play and get to win sometimes. Since it’s a game with perfect information and very simple rules, I thought it should be easy to make an AI for it, so I coded this game.

This game allows playing against human (on the same computer) or against AI with three different difficulties. 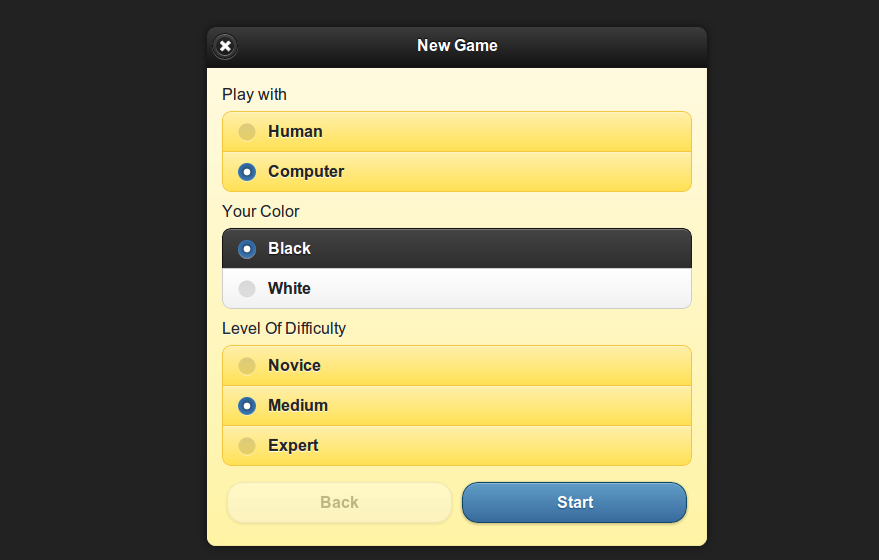 The dialogs and button are built using jQuery Mobile. It wasn’t quite ideal though, as I have to disable transition animation in order to avoid the lagginess on Mobile Safari.

The game interface is built using CSS3, and only two images are used for the background pattern. I used radial gradients for the go pieces and some CSS box-shadows to make the board look more sleek.

For the AI, I used the negascout algorithm together with a little bit of transportation table implemented using Javascript Object. Using a scripting language like Javascript, it was difficult to build a fast AI. So there was some trade off on the strength for performance. The game was only able to search deepest for 8-ply (for expert level) and in each level it searches for around 10-20 ‘best moves’. The moves are ranked based on their score, which depends on how possibile the empty space can be used to form a ‘five’ if a piece is set on it. The evaluation function is then the sum of all the scores of the empty places (if neither side wins yet), with a positive weighting for the AI and a negative weighting for the player. This method is better than my previous method that detects ‘connection’, in that it can better detect and form ‘disconnected’ threat patterns like “** *”.

Because the AI is slow, the game will freeze during the computation of moves. As such, I implemented the AI with HTML5 Web Worker, which is like multi-threading, to make sure that the interface is responsive. I also implemented offline cache which will allow users to play the game offline.

Of course the game can still be improved - at least I haven’t tried the history heuristic, nor some more advnace AI algortithms than negascout. I think it is also possible to implemente the core AI in C++ with the interface written in HTML5. But it won’t be a browser game any more.